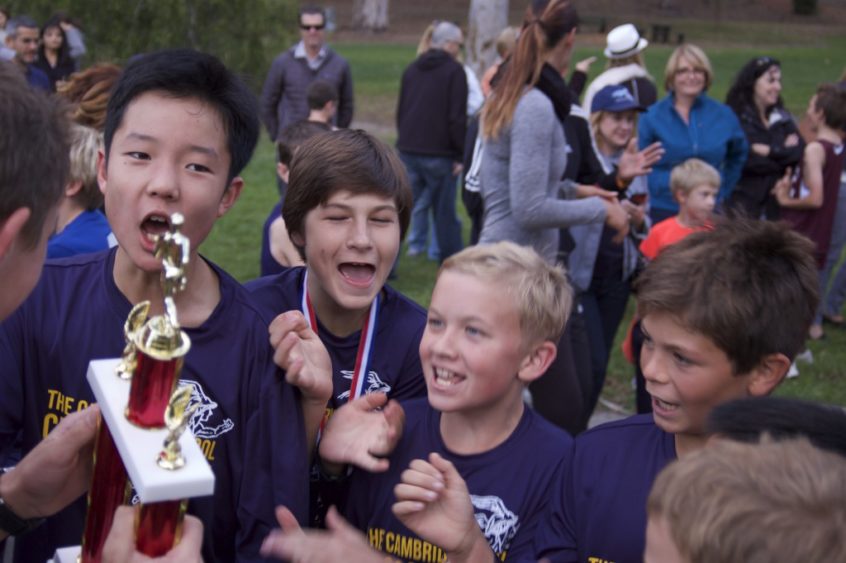 The Cambridge School Cross Country Team had another fantastic season this fall!

Our 5th through 8th grade runners compete in the Intermediate Middle School League (IMSL) against several other private schools around San Diego. The race season concluded on Tuesday at San Dieguito Park, with the Cambridge Boys capturing their second straight IMSL Championship, with the Girls finishing the season in 3rd Place. I was so proud of the effort that each of our runners put into that race; the results speak for themselves with this group.

[frame src=”https://www.cambridgeclassical.org/wp-content/uploads/2015/11/DSC_1259.jpg” alt=”DSC_1259″ width=”170″ height=”240″ lightbox=”on” title=”Cross Country Race” align=”left” ]Our runners trained rigorously over the past three months, including several of our Rhetoric School runners. We ran miles and miles of varying terrain, from paced runs on the 56 Trail next to campus, to heavy volume of hill repeats down on the “monster” hill at Canyonside Park. We also incorporated advanced strength training, metabolic conditioning and running technique protocols into each training session. Most of our runners set personal bests in the few weeks leading up the final race, with several individual standouts. Special thanks to Coach Andy Lozano (also one of our lead PE teachers), who helped me coach our athletes every step of the way.

We are blessed with such a large group of enthusiastic runners at The Cambridge School, and with the caliber of runners all the way down to 4th grade, I expect that we’ll be a strong competitor year-in and year-out. Apart from the training and races, I was especially blessed by all of the great conversations, high fives, devotional times and prayers that we shared together outside in some beautiful surroundings. These kids are passionate, encouraging and inspiring. In our aim to develop and form strong young men and women of the Kingdom through athletics, the 2015 Cross Country season was a tremendous success!

Miss Phoebe Kim was presented with the 2015 “Eric Liddell Award” by Coach Huntley, receiving a literal baton passed on to her by last year’s inaugural recipient, Conner Spinar. The award is named after the Christian missionary and Olympic Gold Medalist of the early 20th Century, famously depicted in the film, Chariots of Fire.

As yet another coveted tradition of The Cambridge School experience, this award recognizes a single member of the Cross Country Team who embodied the standards of character, excellence, determination and leadership that our school and athletics strive to cultivate.